We were extremely disappointed to see designer Solange Azagury-Partridge's new jewellery pieces which were created to raise funds for the End Domestic Violence Global Foundation. 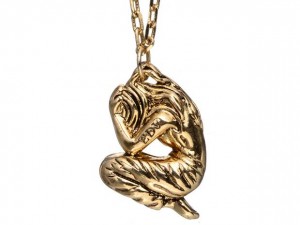 The End Domestic Violence Global Foundation helps support a number of very well-respected British charities working to end domestic violence and abuse, however, this image is simply not appropriate. It buys into myths about women survivors being "weak", insinuates that domestic violence is only about physical and sexual violence and effectively erasing the perpetrator. Domestic violence is a pattern of coercion and control which can involve physical and sexual violence but the most common forms are emotional, psychological and financial abuse. A campaign to end domestic violence must make it clear that the perpetrator makes a choice to abuse - and that women living with domestic violence are surviving a level of state approved torture due to failings within the criminal justice system, the Home Office and the NHS. Cuts to services, particularly specialist refuges, puts women at risk. We need to be clear that police failures to take domestic violence seriously, and the failure of the judiciary to implement appropriate punishment, as well as lack of specialist services all conspire with abusive men in continuing to perpetuate domestic violence.