The cover of a recent edition of The Mirror: 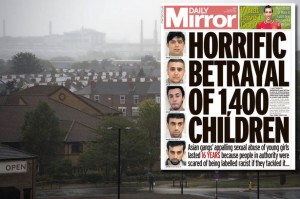 This article in The Daily Mirror refers to a very serious allegation of police misconduct suggesting that a victim of child sexual exploitation was ignored by the police so as not to disturb the on-call doctor. It is one of 22 allegations against police which has delivered to the Police Complaints Commission. There are 14 officers under investigation due to their refusal to acknowledge the reports of child sexual exploitation. These other allegations need to be reported and they need to be contextualised within a victim blaming culture of male entitlement.

We need the media to hold the police to account but we need them to do so in a manner which is not salacious nor minimises the crimes which occurred. 1400 children were raped, abused and tortured in one community. There are thousands across the UK still experiencing sexual exploitation every day and people are still engaged in the wilful and malicious failure to recognise that abuse. This is why we need accurate media coverage of the 22 allegations made to the Police Complaints Commission: to protect other children and hold the police accountable for what has effectively become state-sanctioned child sexual exploitation.