The @BBC and the misuse of scare quotes

Punctuation isn't usually something we comment on. As a general rule, the words used by media are so inappropriate that commenting on their misuse of scare quotes seems unnecessary. Then we saw this tweet: 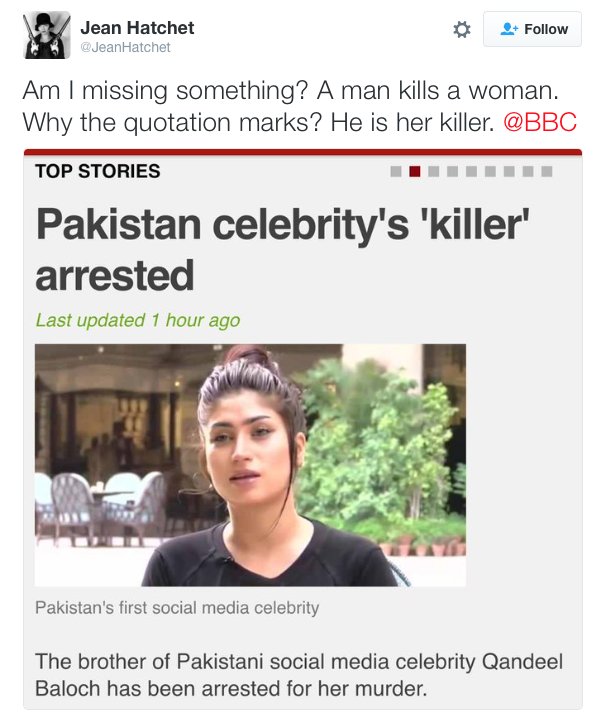 We can't quite work out what the BBC was aiming for with scare quotes around the word killer. Wasim Azeem, the brother of Qandeel Baloch, has admitted to killing her. This fact is not in doubt. Had Azeem been arrested without confessing then it would have been appropriate to use the following:

Wasim Azeem arrested for the murder of Qandeel Baloch

Brothers of Qandeel Baloch arrested for her murder.

Putting killer in scare quotes achieves nothing except minimising male violence. It implies that Azeem was somehow justified in killing his sister - considering the motive was so called 'honour' violence and that another brother Mohammad Aslam Shaheen has also been arrested - the use of scare quotes is deeply problematic. As this section from a petition demanding the government put Wasim Azeem be put on trial, so-called 'honour' based violence, which can be treated as a private offence under Pakistani law allowing the perpetrator to be forgiven by the immediate family, is anything but:

The correct use of scare quotes would be to place them around the word 'honour' not around the word killer. It is lazy journalism and headline grabbing that could be easily avoided without denigrating the victim. But, not uncommon on the BBC.