Richard Dawkins, Julian Assange and the case of the missing dictionary 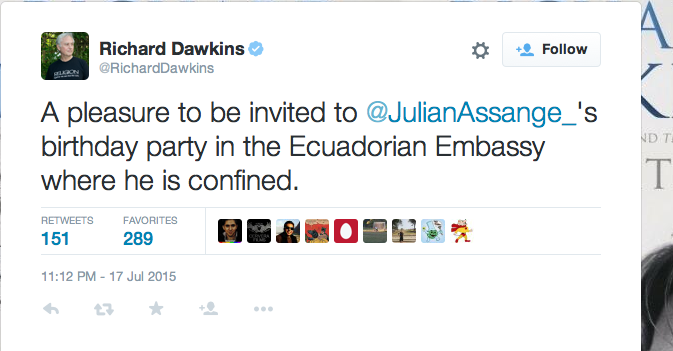 Richard Dawkins seems to have misplaced his dictionary in this recent tweet to Julian Assange. Dawkins has confused the word 'confined" with "chosen to hide out in the Ecuadorian embassy rather than be held legally accountable for his own behaviour". Here at EVB, we like to refer to both Assange and Dawkins as rape apologists since both have a long-documented history of minimizing rape (plus that whole pesky issue of Assange hiding out because he's being investigated for committing rape.

We suggest Dawkins might want to review the dictionary definitions of rape, consent, and confined since he's a tad confused about them. And the legal consequences thereof.

Once he's found a copy of the dictionary.

‹ Media misrepresentations of sexual violence: The BBC Rape is never a “victimless crime” ›

One thought on “Richard Dawkins, Julian Assange and the case of the missing dictionary”