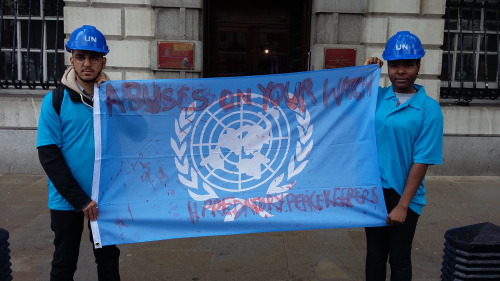 A few weeks ago the UN adopted resolution 2272 which calls for the repatriation of peacekeeping units where soldiers face allegations of sexual abuse. This resolution is the first passed by the Security Council to tackle predatory peacekeepers. This was an ‘opportunity’ for The Security Council, to express ‘its deep concern over allegations of sexual exploitation and abuse by United Nations predatory peacekeepers and to remind members nations of the standards of conduct and discipline required. There was a recognition that allegations of sexual misconduct, abuse and rape needed to be better addressed. A number of requests were put to member states to reduce the occurrence of sexual abuse.  These countries were ‘urged…to take adequate measures to prevent and combat impunity for sexual exploitation and abuse by their personnel’. They were further 'urged to deliver robust pre-deployment training on sexual exploitation and abuse’.

Our position is this it is simply not good enough to 'urge’ member states to stamp out what the UN itself recognises as 'a cancer’. We have been here many time before. Similar ‘urges’ and promises were made, it has not stopped the situation in CAR. Or, in Haiti, or in the DRC, or in Somalia etc… There are clear conflicts of interest in members states investigating themselves for crimes committed in other countries, crimes against bodies that are often seen as expendable…particularly given what is at stake: the reputation of members states’ own military forces and, potentially legal claims which could attract, and rightly so, requests for huge amounts in reparation. 'Urging’ is this context is simply not enough.

More critically, it is quite concerning that most UN discussions and indeed even Resolution 2272 have failed to tackle the safeguarding concerns many predatory peacekeepers may pose, not only in the countries they are positioned or may be re-deployed in, but also in the country they will inevitably return to or indeed be repatriated to. The issue at stake is global. The response must be globally coordinated.  This is beyond predatory peacekeepers’ opportunity to serve their country or the UN. This is even beyond military sanctions such as repatriation or suspension. It is about child protection and it is about safeguarding.   We are talking about a pattern of gross gendered human rights violations committed by foreign military forces put in charge by the UN of protecting a vulnerable population. This concerns us all.

There are reports that some female peacekeepers have been subject of sexual abuses. The pattern of abuse of predatory peacekeepers is clearly male violence and it is not limited to local populations; not that this is any less abhorrent. Thus, it would be unwise not consider and objectively assess the very real risks predatory peacekeepers may pose to vulnerable groups upon their return. Those groups include children and young people they may have access to within their family or indeed clients they may get into contact with through other employment or activities e.g. tourism. At present, there are no mechanisms in place to ensure child protection agencies and/or national or local authorities may be made aware of sanctions imposed on predatory peacekeepers in relation to act of sexual violence.

This means someone could have been found guilty of child sex abuse or been the subject to multiple allegations of sexual abuses in various conflict zones and go on to work with young people or other vulnerable groups upon their return home in countries such as France - which has recently announced it will be pulling its troops out of CAR by the end of the year.  (in addition to being redeployed to other conflict zones).  We do not believe this is right, we do not believe this is in line with accountability or that is in line with any organisation’s duty to protect the public especially vulnerable groups. Safeguarding potential victims everywhere in the world should be a matter of priority for the UN and we look forward to seeing concrete and transparent measures to address this issue. So far our questions to the UN on this matter have received no response.

We need your help to amplify the voices of those protesting on May 29th about the UN’s #PredatoryPeacekeepers.Please support the campaign’s thunderclap on May 29th. Details here

‹ #predatorypeacekeeprs: Action to address Sexual Exploitation and Abuse of Children #PredatoryPeacekeepers – the importance of naming the problem (content note) ›