In West Bridgford Police station today I stumbled across this glaring piece of victim blaming: 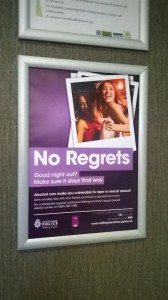 I’d like to point out that this campaign was launched in 2009 and since then Nottinghamshire police have progressed since then. I’d like to, but I can’t. The fact that it’s still present 5 years later suggests no one seems to have picked up on it, not to mention its appalling 2013 campaign which EVB analysed here.

The 'No Regrets' rape and sexual assault awareness campaign sends clear victim blaming messages. Not only does it frame sexual assault as something to be 'regretted' by the victim, implying it was the result of the victim’s actions, not the perpetrators, but it plays right into the hands of those who argue that women commonly ‘cry rape’ when really it was just regretted sex. Neither rape nor sexual assault have anything to do with regret. They have nothing to do with regret as they have nothing to do with choice. They are literally defined by a lack of choice and autonomy. You do not choose to get raped and you do not deserve to have the police, the very people who are meant to help you receive justice, imply it was your fault. The so-called advice – to ‘drink sensibly, stay with friends, and book a licensed taxi home’, under a picture of two women on a night out, is problematic on many levels. It suggests that rape and sexual assault are caused by alcohol, only occur when drunk or on nights out, and will never happen if you are ‘with friends’. Do Nottinghamshire police know that most rapes are committed by someone you know? A friend/acquaintance/partner/family member? Do they know that most sexual offences are committed in your own home/the home of someone you know? Do they know taxi drivers have been known to commit sexual offences? Do they know men get raped too? The ignorance surrounding rape and sexual assault in this poster is frankly appalling.

After searching for more information on the campaign I found this quote from Detective Superintendent Adrian Pearson, head of the Public Protection Unit, said: "People enjoy going out at Christmas time and letting their hair down. But the reality is that drinking excess alcohol can make you vulnerable to rape or sexual assault and may also affect people's judgment. We are urging people to drink sensibly, stay with friends, and book a licensed taxi home. This campaign will hopefully encourage people to think about their safety as well as highlight the importance of consent."

What is also troubling is that manager of the Topaz centre (Nottingham’s Sexual Assault Referral Centre), Michelle Davies, is also recorded as being in support of the campaign. Whilst the police are known for their victim blaming tendencies I would have hoped for much better from someone in charge of a Sexual Assault Referral Centre. Caring for victims is an incredibly important role and I do not believe that someone who supports victim blaming messages is in any way suitable for this Job. I’m sure that the people behind that ‘No Regrets’ rape and sexual assault awareness campaign were probably well-intentioned, but when it comes at the expense of blaming victims for the actions of perpetrators, it is simply unacceptable. The after-effects of rape and sexual assault can potentially leave victims with lifelong trauma, they do not need anyone making them feel even worse, their perpetrators have done that already. I sincerely hope Nottinghamshire police remove all posters and apologize for the incredible damage that their victim blaming has done.

‹ Pakistani women – A call to arms Once again, the BBC ignores journalistic guidlines on responsible reporting ›

2 thoughts on “‘No Regrets’ Rape and Sexual Assualt awareness campaign”