Annie Chapman was killed on 8 September.

There is some suggestion that a sixth woman, Martha Tabram, was also a victim of the same perpetrator. If this is true, Tabram was the first victim having been murdered on August 6th 1888.

It's understandable if you do not recognise these 5/6 names. For 125 years, the name of their killer has been celebrated whilst these 5 women were reduced to nothing more than props in the story of Jack the Ripper. The term 'swansong' appears on more than one website in reference to the murder of Kelly, as though the murder of Kelly was comparable to a professional footballers last game or an opera singers' last concert.

The names of Nichols, Chapman, Stride, Eddowes and Kelly very rarely appear in media coverage of the perpetrator known as 'Jack the Ripper'. Rather, their brutal murders have become the basis of a multi-million dollar tourist industry. There are films, walking and bus tours, as well as no end of merchandise to immortalise and glamourise a violent perpetrator who deliberately targeted vulnerable women.

The newest addition to this industry is the 'Jack the Ripper" museum which is to open on Cable Street in the East End of London this week. The museum itself was meant to be the history of women in the East End of London - a celebration of the suffragettes, the Matchstick girls, and anti-fascist activism. Instead, it will show graphic crime scene photos of the bodies of Nichols, Chapman, Stride, Eddowes, and Kelly.

A protest on Tuesday August 4th meant the museum did not have its grand opening so we don't know the exact state of the exhibits but we're going out on a limb to assume that it won't include a detailed history of each woman. After all, this is a sample of the merchandise to be sold there: 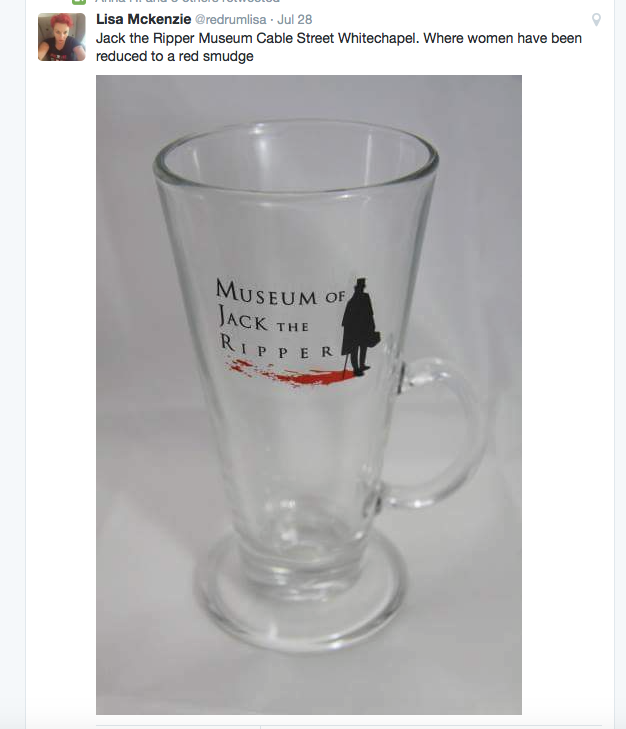 The torture and murder of five women reduced to nothing more than a splash of blood.

We also need to name the victims. Considering the media coverage Jack the Ripper receives, we should all know the names of Mary Ann Nichols, Annie Chapman, Elizabeth Stride, Catherine Eddowes, and Mary Jane Kelly. The fact that we don't is the problem. Remembering only the name or pseudonym of the perpetrator erases the lives of their victims and silences other women.

The story of Jack the Ripper is the lives of the five women he brutally murdered. It is the history of Victorian London and the poverty, racism, classism, colonialism and misogyny that resulted in the murders of not only Nichols, Chapman, Stride, Eddowes, and Kelly but the brutal murders, rapes and sexual assaults of countless unnamed women. It is the story of women and girls being held accountable for the violence they experienced from fathers, brothers, uncles, customers, and, for a number of women in Victorian England, the men who paid for sexual access to their bodies. These women were vulnerable because they lived in a culture which saw VAWG as normal. Not much has changed in the past 125 years.

This is why a museum of women's history is so important and why a museum dedicated to 'Jack the Ripper' is so dangerous. 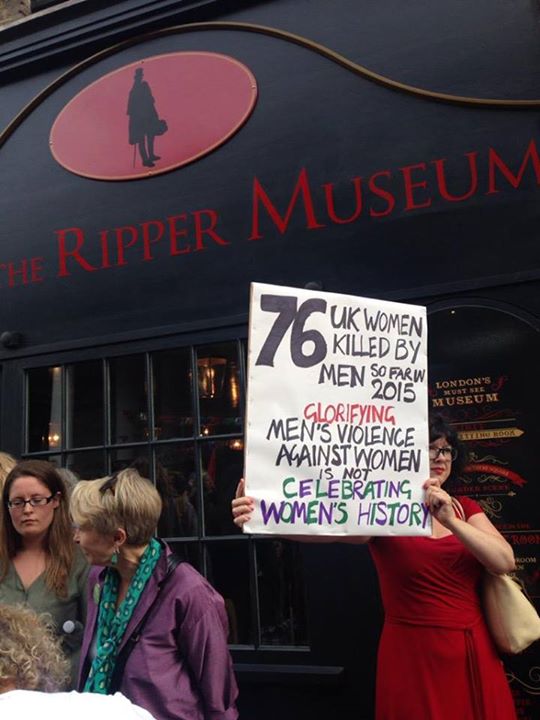