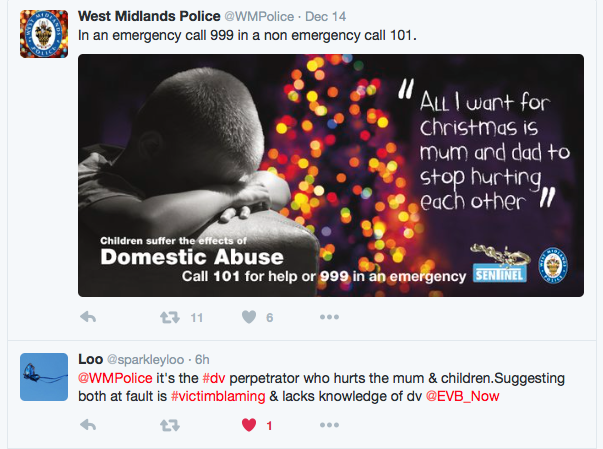 It's safe to say we were utterly appalled by this poster, which demonstrates a complete lack of understanding of the gendered dynamics of domestic violence and abuse (DVA), how perpetrators work, and insists the victim (almost always the mother) is equally culpable for the impact as the perpetrator.

This is classic victim blaming of women and serves only to allow the perpetrator to elide responsibility for the consequences of his choices and actions. Because, the perpetrator of domestic violence and abuse is almost always male, whether they are the birth father, adopted father or stepfather.

Domestic violence and abuse is a gendered crime, perpetrated by men against women and children. The statistics on this gendered nature are very clear, particularly when you count individual instances of physical or sexual abuse. The Office of National Statistics (ONS) actually caps the number instances of DVA that it records for a single person, almost always female, at 5. This means that a woman can experience an act of physical abuse every single day for a full year but only have 5 of those incidents recorded in the official statistics. These statistics do not reflect the pattern of coercive control that defines domestic violence and abuse.

Sylvia Walby, who conducted the research into ONS recording of DVA found that:

"unquestioning repetition of the 'one in four women, one in six men' statistic has serious side-effects."

It results in local authorities using a 'gender-neutral approach' to provision resulting in decreases in provision for women, whilst simultaneously creating provision for larger numbers of men than actually need the services. It results in police campaigns that blame the victim for the consequences of the perpetrator's choices and actions, which in turn make it more difficult for women to report their experiences to the police. After all, how can  you trust a police service that tells perpetrators that their victims own 50% of the responsibility for their crime?

A quick check on the West Midlands Police twitter feed came across this: 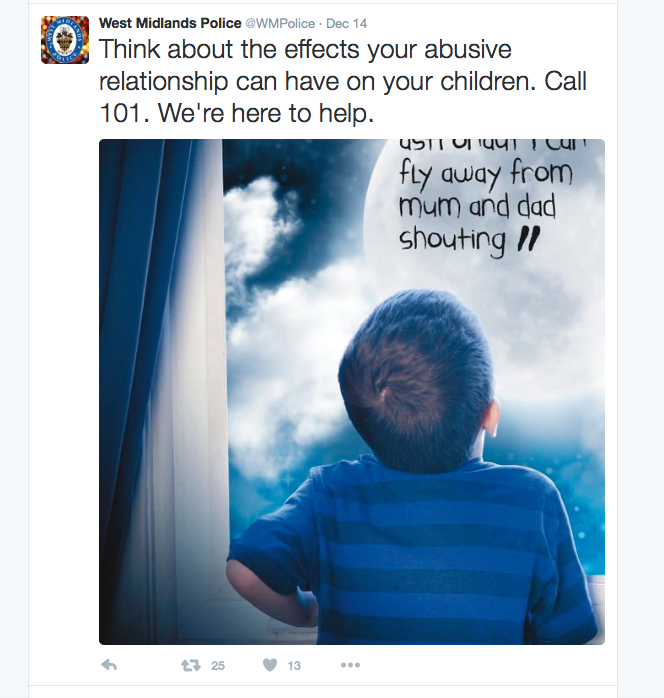 To be clear, once and for all: there is NO SUCH THING as an 'abusive relationship'. There are perpetrators of domestic violence and abuse who make a choice to engage in coercive control and use physical, sexual, and financial abuse to maintain the psychological and emotional abuse of their partners and children. Using the term 'abusive relationship' implies that both partners are equally responsible for the abuse. The ONLY person responsible is the perpetrator.

It is absolutely true that living with domestic violence and abuse, regardless of whether or not they see the abuse, can have a negative impact on a child,:

Domestic abuse has a serious effect on children in the household in a number of ways, either the abuse spreads to the children, or they are psychologically affected by the abuse they see and hear.

A campaign has been launched to focus on the emotional effect domestic abuse has on children and appeals to parents to consider the effect on their children as an additional reason they should seek help.

However, the person responsible for the emotional effect on children is the perpetrator.

It's also telling that the emotional and psychological consequences of DVA on children only counts in police 'safety' campaigns. It certainly has little impact on criminal prosecutions. Family courts dealing with access and residency frequently allow violent fathers unsupervised access. Here violent fathers are rewarded for their behaviour allowing them to continue engaging in the coercive control of their former partner. The emotional and psychological toll on a child witnessing the continued abuse of their mother and having to manage a violent father is not considered sufficient to deny access - even when the research is clear that it is not in the best interests of a child.* 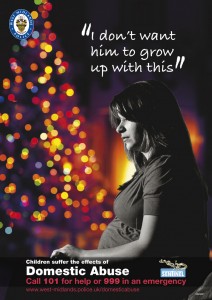 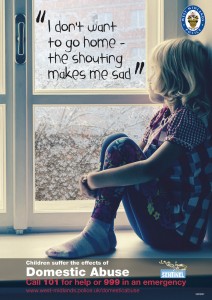 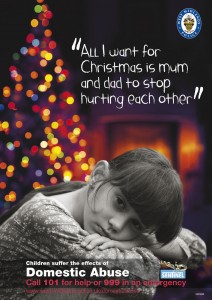 Harne, Violent Fathering and the risks to children, 2011