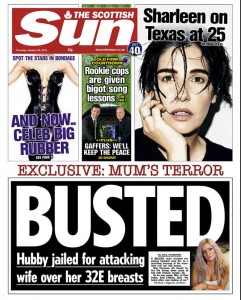 We've seen some really quite creative expressions of victim blaming during our campaign. Blaming a woman's breast for her assault would definitely make our Top Ten list, if we ever made one.

Graham Temple has been sentenced to 13 months in jail for physically assaulting his partner May Thomson. During the three years of their relationship, Temple assaulted Thomson multiple times:

Temple was a violant man who chose to assault Thomson. He chose to engage in the pattern of coercive control which is the main signifier of domestic violence. Frankly, we're shocked that Temple only received 13 months.

We're disgusted that the media is blaming Thomson for the abuse because of her breasts which made Temple "jealous". As we have made clear on numerous occasions, jealousy is NOT a mitigating circumstance. Men who commit domestic violence make a choice. The media needs to take responsibility for publishing articles which hold victims of violence responsible and they need to start following the guidelines set out by the National Union of Journalists. It is absolutely reprehensible for the media to publish articles like that of the Sun which blame women for violence. As long as the media continue to collude with abusive men in mitigating their responsibility, we will not end a culture of male domestic violence which costs our economy £27 billion pounds a year.