This is male entitlement: why domestic & sexual violence are gendered issues (content note for extreme violence)

Every time we tweet about male entitlement and male violence, we hear two things a) not all men and b) women are violent too. We need to be clear here: the vast majority of violence is committed by men. Street violence is usually committed by men against other men. Domestic and sexual violence and abuse are overwhelmingly perpetrated by men against women and children. Male victims of domestic and sexual violence and abuse are mostly likely to be abused by male partners. This is the reality of gendered violence in the UK.

Not all men may perpetrate domestic and sexual violence and abuse, but all men profit from a system where women are routinely shamed and punished for acting outside of prescribed gender roles. This is why housework and caring for children or family members with disabilities is overwhelmingly done by women and why men consistently over-estimate the amount of caring they do. Without women's unpaid labour, our economy would collapse. Despite this, women are more likely to live in poverty than men and children who live in poverty tend to live in a single parent household with their father with a father who pays little or no maintenance.

The economic vulnerability of women and men's belief in their entitlement to the unpaid labour of women creates a system where other forms of violence against women and girls are daily occurrences. Male entitlement to women's bodies teaches men that they have the right to sexual access to women's bodies, regardless of whether or not she consents. Male entitlement teaches men they have the right to control their wives and children. Family law in the UK is still predicated on the basis that women and children are the property of men.

Below are four examples of male entitlement and violence. This is the reality of our culture and it is why the constant refrain 'not all men' will not end violence against women and girls.

Charlotte Proudman's public outing of Alexander Carter-Silk's grossly inappropriate email to her after they made contact on the professional service LinkedIn demonstrated clearly what male entitlement actually looks like: a man believing he has the right to comment on a woman's appearance. The response from other men to Proudman's twitter comment made the link between entitlement and male violence perfectly clear. Proudman received thousands of abusive messages. She was repeatedly told the sexual harassment was her fault for daring to put her picture in the public sphere (despite men on LinkedIn doing the same). Threats then followed. 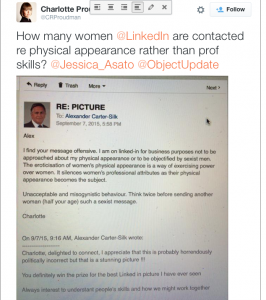 Fidel Lopez chose to kill Maria Nemeth because she allegedly said her ex-husband's name during sex. He raped Nemeth with multiple objects before disembowling her by inserting his fist in her vagina and then ripping out intestinal matter.

This comment was submitted on our Facebook page in response to an article on the Black Dot Campaign:

99.99% DOMESTIC VIOLENCE = ALCOHOLISMWould this really matter when the abuser is almost always an alcoholic or had one to many drinks?
The public wants it both ways. Drink, drink, drink and expect the person not to do stupid things. The women in these relationships also have a lot to blame by going out and drinking with them in the first place and not expecting something stupid like date rape or domestic violence not to happen in the future when things get financially tough.
If this Black Dot really worked, then it would also stop Drunk Driving.