The murder of Jo Cox 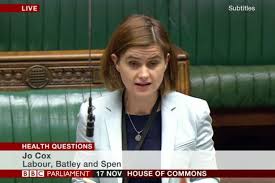 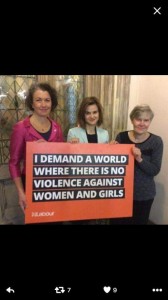 Jo Cox, the Laboour MP for Batley and Spen, is the 57th woman to be murdered in the UK in 2016 by a male perpetrator.

Whilst the police have yet to confirm the name of the perpetrator, named as Thomas Mair by the media, or eyewitness accounts of Mair shouting 'Britain First', what we do know is that the police are investigating the possibility of white supremacist political motivations. We also know that another man had been arrested in March under the malicious communications act. The Times claims that the police were considering changes to Cox's security due to the three months of harassment leading up to the arrest in March but that there was no link between the harassment and Cox's murder.

The media are already using terms that minimise Mair's responsibility such as 'loner', and 'mentally ill'. Sky New has tweeted this headline based on a quote from Mair's brother Scott who claims Mair was 'non-violent' without a hint of irony. 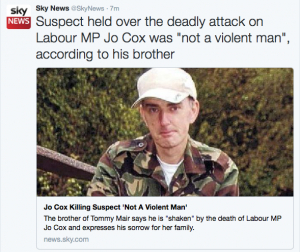 Because shooting a woman three times, repeatedly stabbing her, kicking her and pulling her by her hair are not somehow multiple acts of violence? Our experience researching media representations of domestic and sexual violence and abuse across multiple media platforms in 4 countries suggests that this refers only to public forms of violence - those committed in the home against intimate partners or other female family members is rarely recognised as forms of violence. Soraya Chemaly's coverage of the massacre in Orlando evidences just how far the media will go to erase a perpetrator's history of domestic violence.

The Guardian and BBC are quoting neighbours using the term 'quiet' as though not knowing your neighbour socially mitigates personal responsibility for criminal acts of violence.  The Daily Mail summed up much of the current media coverage in this one sentence:

"There is unconfirmed evidence Mair supported far-Right causes and claims he had mental health problems and had been released recently from psychiatric care."

The conflation of mental illness with violence is simply not tenable. People who live with mental illnesses are statistically far more likely to be victims of violence rather than perpetrators. Yet, white men who commit crimes of violence are frequently labelled 'mentally ill' by the media despite very little evidence to support the label. People who support white supremacist organisations, including paramilitaries, do not suffer from mental illness either. The media linkage of Mair's history of mental illness as a precursor to femicide is irresponsible; as is 'humanising' Mair by writing about his love of gardening.

What we do know is that the vast majority of violence in the UK is committed by men; not because they are 'mentally ill' but because we have a culture of hyper-masculinity and male entitlement that not only condones but actively encourages violent behaviour in young boys and men.

Whether or not we learn if this murder was politically motivated act of racist terror or a targeted personal attack, we can contextualise this murder within the framework of violence against woman and girls. The murder of Jo Cox is not an 'isolated incident'; not when Cox is the 57th woman to have been murdered by a man already this year. It is part of the continuum of violence against women and girls which includes the harassment of Cox and other female MPs who have also received rape and death threats, the 85 000 women will be raped by a male perpetrator in England and Wales, the hundreds of thousands of women who are living with domestic violence, teenage girls who are sexually harassed on the streets by adult men, sexual harassment in schools and workplaces, and the women currently detained in Yarls Wood fleeing sexualised violence in their countries of birth only to be sexually assaulted again whilst supposedly 'safe' in detention centres.

Statistically, it is far more likely that the murder of Jo Cox was an act of political terrorism by a man who supports white supremacist organisations and who will have a history of misogyny. As Chimene Suleyman writes for Media Diversified:

In all likeliness this was not symbolic brutality against the system — not an act of a random nature against any old representative of the political class — but a fundamentalist attack on a woman whose ideals, both in her charity work and as MP, placed human rights for disenfranchised Syrians, oppressed Palestinians and immigration at the core of her narrative. What an appallingly upsetting shame then that she should die, not because of her stance on human rights but instead killed within a British climate that has confused social sociopathy for economic debate and scaremongering immigration laws.

Jo Cox was murdered by a man who made a choice to kill - a man who also has a documented history of ties to white supremacist organisations during a political campaign that has seen racism and xenophobia replace debate, whilst we congratulate ourselves on not having a misogynistic and racist candidate like Donald Trump running for political office.

Whilst we mourn the loss of Jo Cox, some reflection on why people living in glass houses shouldn't throw stones is required. Men like Thomas Mair are not aberrations. Racism and misogyny are not 'isolated incidents'. They are British culture and we need to fix this.

‹ Husband shames me for sexual assault but claims he doesn’t (content note for depiction of rape) Refusal to pay maintenance is a form of child abuse. ›

One thought on “The murder of Jo Cox”