Patrick Kane: Another athlete under investigation for rape. This time it’s the Black Hawks fault.

Chicago Blackhawks player Patrick Kane is currently under investigation for rape. As we see with all athletes accused of violence against women and girls, as with Ray Rice, excuses are already being made for Kane. According to an article in the New York Times,  National Hockey League commissioner Gary Bettmen has already labeled the investigation "unfortunate", proving that he completely missed the backlash to the National Football League who sought to minimise Rice's assault of his then partner (they are now married).

The New York Times article, written by Michael Powell, differs from the usual victim blaming language we usually see. Instead of holding the victim accountable, Powell holds the NHL and the Chicago Blackhawks for not intervening with Kane during previous bouts of violence and drunkeness. Normally, we're fully supportive of recognising how the behaviour of those around a perpetrator support both the perpetrator as an individual and the larger patterns of rape culture by minimising, excusing or ignoring their violence. In this case, Powell has actually blamed them for Kane's choices:

We absolutely agree that sports teams must make a greater effort at dealing with the violence and inappropriate behaviour of their athletes. Suspending an athlete, with or without pay, pending a criminal investigation is an appropriate step to demonstrate that they take male violence against women and girls seriously. However, the athletes are still responsible for their own behaviour.

Equally, anyone who invokes the refrain "boys will be boys" in reference to male violence is engaged in minimising the choices of individual men to behave in a manner which causes harm to those around them - whether this be through violence or by making a space unsafe for women and other men. 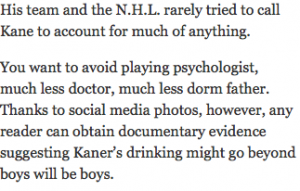 "Boys will be boys" is an excuse predicated on the belief that men are incapable of controlling themselves - a refrain which is actually harmful to men too.

Patrick Kane is under investigation for rape as a consequence of his actions. No one made him engage inappropriate behaviour in the past; nor is anyone else responsible for his conviction for assaulting a 62 year old taxi driver.

The Chicago Blackhawks and the NHL have not done enough to deal with violence against women and girls perpetrated by their players, managers and other staff. The NHL is an uniquely privileged position to create a serious public discussion about male violence and the appropriate consequences for perpetrators. This doesn't negate Kane's personal choices.

Rape culture requires addressing the behaviour of individuals as well as the larger culture; not suggesting that someone else is responsible for the behaviour of a 26 year old man because he's one of the 'boys'.