At this time of year, it is usual for UK police forces to publicise their festive campaigns. We've done some research with the help of our twitter followers and the internet, and this is what we have found. We've picked out some highlights - some good, some bad and some absolutely dreadful and we're hoping to be able to repeat this report each year. We might even develop a league table!

Avon & Somerset This campaign contains the usual advice; book a taxi to get home, don't drink excessive alcohol, keeping an eye on who is buying your drinks. It seems to have become the norm for these campaigns focus on women - women should be watchful, more careful, not drunk, but we also noticed some focus on (prospective) perpetrators in this campaign:

As police campaigns go, this one is a good one. It's clear that some thought went into the homework.

Cleveland Police don't have campaign that is specifically about sexual violence and the festive season, but they are taking part in the national 'In Focus' campaign on rape, supported by the Association for Chief of Police (ACPO). One comment in the press release stood out:

“I would also like to warn anyone tempted to target someone who is perhaps vulnerable through drink or through having been separated from their friends, that we will always do everything possible to bring perpetrators before the courts.”

We would like Cleveland Police (and others) to understand that not all women want to report their rape to the police, and so maybe their campaign could focus on education and prevention of rape. They could do this by taking their preventative message to perpetrators and prospective perpetrators - who, after all, are the only ones who can actually stop rape.

Cleveland Police - you're barely scraping a Satisfactory. Must try harder.

Cumbria Police are working in conjunction with other forces, have the 'Keys, money, phone, plans to get home' campaign. We couldn't find a specific reference to women, but look at the image they're using:

Dorset Police have this to say about their campaign:

The campaign aims to prevent alcohol-related rapes and sexual assaults by encouraging people to reduce their chances of becoming a victim of crime by ensuring they follow personal safety advice.

'Alcohol-related rapes'. We know perpetrators deliberately target women who have been consuming alcohol - this is not about women drinking. It is about the perpetrators of rape targeting a vulnerable victim.

Dorset Police - you are currently bottom of the class.

Northumbria Police are using the same 'Keys, money, phone, plans to get home' campaign as Cumbria, but they have a video on their website to encourage you to remember this snappy phrase:

It only has women in it.(YouTube clip)

Northumbria Police - we were hoping for better from you. Hopefully, the launch of your Violence Against Women & Girls strategy will see a focus on perpetrators in time for our next report.

South Yorkshire Police have a general Christmas campaign that does have a perpetrator focus. However, as with many of these, they imply that it is increased alcohol consumption that causes rape. This is simply not true.

South Yorkshire police - we're issuing you with a Notice to Improve.

West Mercia and Warwickshire have a joint campaign - Stop Rape Now. Considering how badly West Mercia have performed previously, this is an enormous improvement.

The campaign is heavily focused on the behaviour of perpetrators and has taken them to the top of the class.

West Yorkshire have another one of those 'festive crime prevention' campaigns that focuses wholly on women.

We know West Yorkshire police are implying risk by using this image:

We had high hopes for the Police Service of Northern Ireland (PSNI) because they are publicising a video that you think is going to be wholly about women, but then focuses on the perpetrator. Clever.

Then we saw this:

PSNI, sit down. You're staying behind for a lesson on the behaviour of rapists.

North Wales Police are also worried about our safety.

Remember, nothing will turn you into a potential victim quicker or more effectively than alcohol

Really, North Wales? We know you can do better than this. You're just not trying hard enough.

South Wales Police are all about the scare tactics, just look at that font!. And the obligatory 'falling for the usual rape myths' nonsense, of course.

South Wales police, you are last alphabetically and we think it is fitting that you've ended up at the bottom of our class. You're heading towards Special Measures.

When we were gathering this information, we looked at all of the 45 police forces. Some didn't have specific festive 'safety' or 'anti-rape' campaigns. We did however notice that all of the forces have a Drink Driving Campaign and we think it's interesting how these are phrased so differently to the anti-rape campaigns. In all of the drink driving campaigns, the focus is on the perpetrator. 'One drink could be one too many' 'Drink Driving - it's not worth the risk' 'No limit is a safe limit'.

Most of these slogans were accompanied by an image of a car accident, or someone in a police cell. All of them, without fail, focused wholly on the decision to get behind the wheel, made by the driver who had consumed alcohol.

None of them said 'Pedestrians! Stay at home in case there is a drunk driver in your area'. Nor did they say 'Families - leave the car on the drive tonight, there might be a drunk driver about'. Not one of them mentioned that ordinary people, going about their ordinary business, having an ordinary life, should change their behaviour to avoid the risk of crossing the path of another ordinary person, who happens to be a drunk driver.

We hope that UK police forces will reflect on the message that this sends. The constant comparisons to acquisitive crime are frustrating and don't make any sense. Victims are not possessions, they are not things to be 'owned' that could be 'stolen'.

All of the police forces in England, Wales & Northern Ireland would do well to look at their counterparts in Scotland. They are our leaders today & we award them a well-deserved Outstanding.

We've gathered our information from the current UK police Christmas/festive campaigns. If your local force has a festive campaign, add the details to the comments.

It seems that Nottinghamshire Police have taken the A* for bad taste in their festive anti-rape campaign. 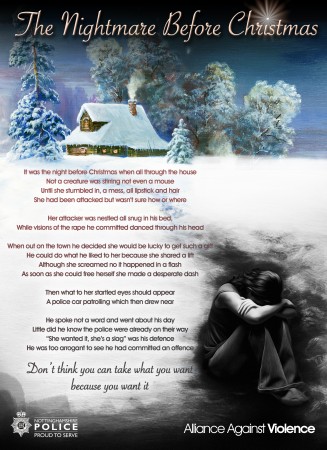