Dear @Independent, Nicki Minaj is not responsible for the actions of her brother. Name him.

Jelani Minaj has been charged with first degree rape and first degree course of sexual conduct against a 12 year old child in Nassau. He is currently on bail having posted the requisite $100 000 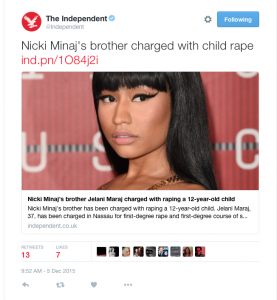 The Independent not only fails to mention Jelani Minaj in their tweet, they don't even name Jelani Minaj until the second paragraph of the article. They have completely erased the child victim from their own experiences of repeated rape by making it clear that the rapist only counts because of his relationship with a famous woman.

Nicki Minaj is not responsible for the actions of her brother. She did not commit rape. Naming Minaj serves only to shame her for being related to a man arrested for rape - effectively blaming Minaj for the choices of her brother.

The Independent needs to remove Nicki Minaj's name from their tweets and from the article. Name the perpetrator, not the women who happen to be related to him. And, then they need to try and show some compassion to the child who was raped. This article should be about the rape of a child, not clickbait to increase advertising revenue.

‹ An abusive man Rape in a New Relationship ›

One thought on “Dear @Independent, Nicki Minaj is not responsible for the actions of her brother. Name him.”