The Sun’s Campaign to Save Refuges 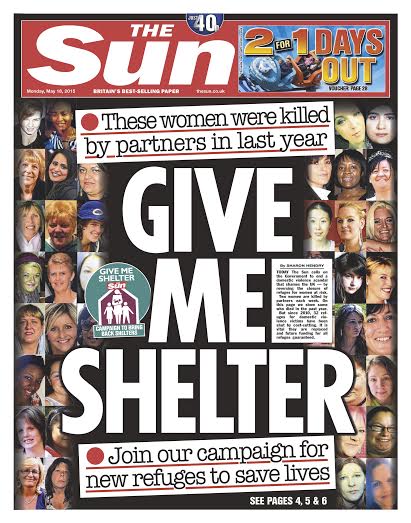 We are conflicted about this campaign from The Sun. Raising greater awareness of domestic violence is absolutely essential. Far too many people believe that domestic violence is something that happens to "those women" and most rarely consider who perpetrators actually are. The media rarely gives accurate coverage to the reality of domestic violence: that 1 in 4 women experience it during their lifetime; that less than 40% of single incidents are reported to the police but they still receive 1 phone call every minute; or that 2 women a week are killed by a current or former partner. In pure economic terms, domestic violence costs 23 billion pounds a year. This cost is the minimum since public services do not "collect information on the extent to which their services are used as a result of domestic violence". It doesn't include the cost of family court and legal aid where women are forced into giving abusive fathers contact with children or the fact that many of the children living in poverty in the UK do so because their fathers refuse to pay maintenance (financial child abuse).

Media coverage of domestic violence ignores the human cost to women, children and men: to their physical and emotional health and the impact on extended families (some of whom are also perpetrators).

We want the media to increase coverage of domestic violence and we want to see them raising the issue of funding. Chronic underfunding of specialist women's services, including refuges, are putting the lives of women and children at risk. Well-funded refuges are necessary to support women, but these refuges must be run by specialist organisations who have the appropriate training to effectively support women. Far too often recently, specialist service providers have lost their contracts with local councils to housing associations who are simply incapable of adequately supporting women and children. This cannot go on. And, we need the media to make it clear that investment now will not only save lives but also impact on the costs to the economy in the future since the government has made it clear they care more about the budget than people.

The Sun has a huge readership and can raise awareness in ways that Women's Aid simply cannot. Obviously, there are questions that need to be discussed and, if The Sun are serious, there are further steps they need to take to convince us they fully understand the links between media representations of women, racism, classism, male entitlement, male privilege and male violence. There is real conflict between The Sun running a campaign raising awareness of domestic violence and them running a story entitled "First pic of body in boot   mum Claire O'Connor". Using terms like "body in boot" to refer to a woman murdered by her partner is dehumanising.

We would like The Sun to take the next step and insist that all of its journalists undergo specialist training on how to write accurately about violence against women and girls by following the very basic guidelines sent out by the National Union of Journalists. We want The Sun to commit to more than just a front page story. We want to see them stop using inaccurate and misleading language which excuses perpetrators and blames victims. We want them to recognise that their support for the Conservative party during the last election will put more women and children at risk due to funding cuts to refuges, education, social work and the NHS. The very reason that refuges are in dire straits is because of continuous slashes to their budgets at the local and national levels. Austerity is literally killing women and children.

‹ The BBC responds to a complaint: Badly 170 Bikers Charged in Melee With Roots in ’60s ›

5 thoughts on “The Sun’s Campaign to Save Refuges”