#predatorypeacekeeprs: Action to address Sexual Exploitation and Abuse of Children 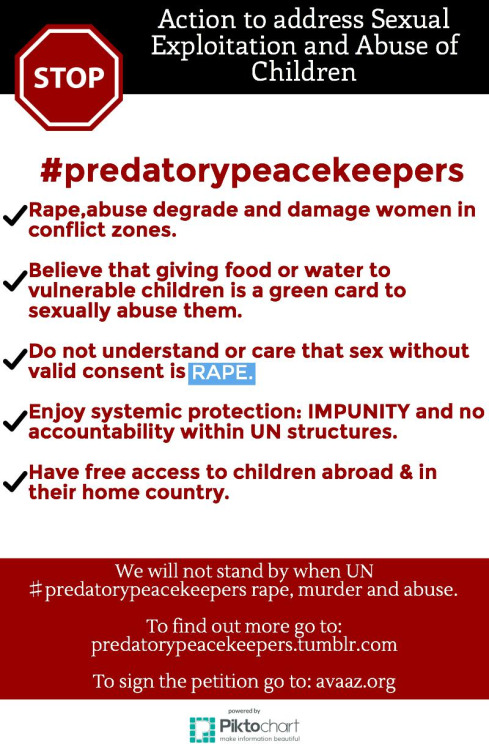 This article has some victim’s testimonies if you need any convincing: The UN Peacekeepers sent to protect vulnerable children have been raping them instead

TWEET the following: Please help spread the word out about #PredatoryPeacekeepers on May 29th by pledging to tweet via @ThunderclapIt https://t.co/L2m139IGAO

Next week Sunday - May 29th is the United Nations International Day for Peacekeepers . @WritersofColour’s twitter will be dedicated to retelling the stories of their victims and demanding definitive action detailed in the petition below.

Join in using the hashtag #PredatoryPeacekeepers Make a noise and make sure the United Nations know we will not stand for any more abuses, any more impunity.

Keep the pressure on the UN to actually act on the recommendations from the December 17th 2015 report, “Taking Action on Sexual Exploitation and Abuse by Peacekeepers: Report of an Independent Review on Sexual Exploitation and Abuse by International Peacekeeping Forces in the Central African Republic.” and importantly to be transparent about what they are doing and giving the public a timeline of when they will be doing it

‹ “What fathers think of their daughters boyfriends” meme is simply misogynistic Predatory peacekeepers and child protection, time for the UN to think globally? ~ Campaign statement ›